I will never forget that day. It was morning, and I’d just made the bed where my three-year old and one-year old sat and played. Folding clothes I watched the news as I waited for the curlers to do their job in Abby’s hair. And then across the screen shot the scene of an airplane plowing into the first Twin Tower. Confused I stared at the TV wondering if I’d misunderstood and was simply watching a clip from a movie. Then like a right hook to the jaw, reality punched me in the heart, and a new reality was born.

Nine eleven is a day most of us will never forget. The scene of the Twin Towers crumbling to the ground, people jumping to their deaths, and thick billowing smoke choking the New York City air will not soon be forgotten. Like our parents and grandparents could ramble off the details of where they were during JFK’s assassination in striking detail, so too can our current culture tell you where they were, whom they were with and what they were doing on 9/11.

We watched as smoke and debris coursed through the streets of New York City between the buildings choking out the oxygen. Those fortunate enough not to be in those buildings that fateful day were still impacted. It changed the entire world. People lost loved ones, homes, jobs; as a country we lost our sense of security whether false or real.

Emotionally the devastation went deeper. Ground Zero represented shattered dreams, lives, and hope in the future. It humbled a country that to that point seemed invincible, untouchable. For a brief moment, all seemed lost. Physically, the place was a mess. Brokenness littered the city in the form of collapsed buildings and unaccounted-for loved ones. I remember seeing the photos and being so overwhelmed at the magnitude of it all. How would they ever clean it up?

Though I wasn’t there I felt the affects as clearly as if I had been. The sense of fear and vulnerability rippled through the rest of the world. We waited on pins and needles for what would happen next. Every human being on the planet with access to some sort of media knew what was going on and was deeply affected by the event. We asked things like, could this happen in my city? Will America ever be the same? What happens next? What kind of world will my babies grow up in?

Two thousand years ago Jerusalem experienced it’s own devastation. I wonder if Mary and the disciples, if they were here today, would be able to recount in vivid detail that day. What was the atmosphere around them? Could they sense the evil that snaked through the crowd? What were they wearing? What were they feeling? What were they worried about? Did they have regrets?

In the days that followed 9/11 I spent every free moment I had in between changing diapers and feeding babies, glued to the TV and internet watching and reading anything that had to do with the gloomy situation our country found itself in. I wanted hope. I wanted it to not be true. I wanted to wake up and have the whole thing turn out to be nothing but a bad dream.

I imagine Mary wanted the same thing. I imagine she would have given anything to wake up and have the scene in front of her, her Son hanging by His hands, skin shredded and broken, to be nothing but a horrible nightmare. I imagine His followers wished they’d had more time with Him, listened more carefully, and paid closer attention. I imagine the warnings He gave of this day never prepared them for what they would see, and I imagine the devastation they felt must have threatened to choke out their very breath.

Mercifully, God doesn’t leave us in our devastation but finishes every story in a way only He can. On a day that had become New York’s normal, volunteers and firefighters continued their tireless work of sorting through the wreckage. And there it was: two pieces of metal intersecting to shape a cross in the middle of the mess. I believe this piece of metal was placed in the middle of the wreckage by divine hands for a divine purpose: to give us hope.

The scene at the foot of the cross was no less messy, no quieter. Pools of blood on the ground, groaning, crying and jeering all contributed to the chaotic scene. But again, God never leaves the story at hopelessness. Three days later with His body having been buried in a dark hole sealed by a stone, Hope awakened, got up and walked out defying death and anything else Satan throws His direction.

Every single one of us comes to a point of decision, a ground zero, if you will. Faced with our sin, our mess, our mistakes, wrong choices, sinful actions, we have to decide. Do we wallow in the chaos or do we choose life? Because Jesus didn’t stay dead, we don’t have to either. Just as He carried His cross to the top of the hill, we too drag our sin to the foot of it and leave it there. Do you remember where you were when the reality of that haggard cross and the empty tomb changed your life? What pit were you in? What emotion had swallowed you up leaving you desperate? What sin brought you to the end of yourself? Do you remember? God help us if we ever stop dragging our sorry selves to the cross. It’s there that we find redemption, reconciliation and renewal.

There are those who were angry at God for allowing terrorism to hit our country in the evil way it did. Why would a loving God do that? Where was He when the breath of 3000 plus people was snuffed out so needlessly? Because I know God and have been privileged to be a student of His character, I know that 9/11 broke His heart like it broke ours. I believe that if He was walking the earth that day, He would have stood in the middle of the chaos and cried with those who cried. But because His story didn’t end at the cross but at the open tomb, there’s the reminder of God’s love in things like crosses made out of twisted metal. 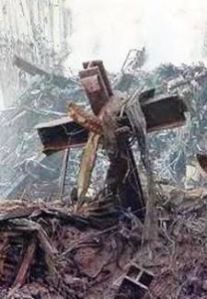 View all posts by kathryn nielson

One thought on “Ground Zero”