Like most kids, I grew up loving Christmas. Hands down the best part about the whole season was decorating the Christmas tree. My mom and dad would drag it up from the basement, pull it out of the box and assemble it, fitting the branches into their color-coordinated holes in the base. I loved it. We doused it with colorful felt ornaments, homemade ornaments, sparkly ornaments, colored lights and a truckload of silver tinsel. To my young eyes its grandeur stood unmatched dwarfing every other ornament placed around the house. 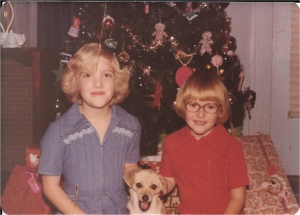 But…there was always this niggling frustration in the back of my head. The tree wasn’t real. I don’t know where the obsession with real trees came in. I didn’t know anyone who had one. But the oddity of placing something real from the forest in the middle of my house taunted me.

In moving to an apartment, to college, and back to apartment, I had all shapes and sizes of trees. Short trees, emaciated trees, skinny trees. No matter what they looked like, they all had one thing in common: they were fake. I wanted a real one, and it was a dream that would not die.

Enter Bruce, my husband, the quintessential New Englander. Unlike my history with fake trees, he’d never had one. He knew they existed, but no true self-respecting New Englander would actually have one-at least not as their only tree. One could accessorize with the copycat version, but to have a plastic evergreen heralding the season in one’s home was unthinkable.

Our first Christmas came two months after we were married. We decided to spend it alone in our little apartment watching Christmas movies, eating steak, and gazing at what I insisted would be a real tree to which my husband responded with a look of is there any other kind?

So one Sunday afternoon while my sister was in town we set off for a tree farm to pick out our own tree and cut it down. Not only would the blessed thing be real, but Bruce was going to show me what picking out a tree was really all about. Ritualistic in nature, it involved the tedious task of finding it, cutting it down, mounting it to the top of the car and driving it home. Lest you think all trees are created equal, you couldn’t be more wrong. A Fraser Fir, considered by my husband as the Cadillac of trees, was simply the only option. The whole thing was incredibly romantic, and I almost couldn’t take it.

About an hour and a half into the search, I got a little tired. We walked all over the stinking farm looking for the perfect tree. In my head, they were all perfect because they were real and big and smelled like Christmas. I didn’t realize it at the time, but this painstaking search for perfection would be how my sweet my husband would research all future purchases from baby strollers to sandwich bread. I could appreciate that he excelled at the skill of tree shopping. Apparently, he was so good at it that his family would not purchase a tree until he was home from college on break and able to go get it, no matter how late in the season it was. It was impossible for anyone to pick out a tree like Bruce. So I’d been told.

Weary of the whole thing, my dream of authentic foliage dashed by the sheer absurdity of the search, I suggested that a fake one from Walmart would suffice and marched off in the snow back to the car with my sister in tow. We waited another hour and a half. Finally, from the distance I saw a tree moving toward us. As it got closer I realized that buried under this mass of foliage was my husband manhandling this thing proud as a peacock. We waited another half hour as he hoisted onto our little Ford Tempo, triple checking the bungee cords to make sure it wasn’t going anywhere while we drove home.

To say that it was large would be an understatement. It literally took up most of a the wall where the sliding glass door sat, protruding out into the living room leaving no one to wonder what season we were in. I could not wait to get my hands on that tree and decorate it, bringing to life what I was feeling inside. 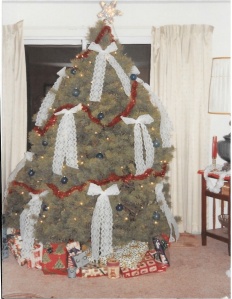 The decorating of a Christmas tree is much like accessorizing an outfit. “Forest fashion” represents the “wearer” to the outside world. In this instance, my “forest friend” donned blue Christmas balls, red tinsel, and big white lace bows leftover from my wedding representing my newlywed bliss and diehard patriotism.

In my humble opinion, no more beautiful a tree could be found anywhere. Every morning as I sipped my coffee, I would sit and stare at its blinking lights and be taken back to that beautiful childhood tree-though fake-that I found so mesmerizing.

In the 24 years we’ve been married, only twice have my husband and I ignored our tree standards, disappointed both times. In moments of strict frugality, my romantic visions of the perfect tree were thwarted by the price, and we succumbed to plastic simplicity one year and something real but very pokey the next year. We decided that like saving for Christmas presents, saving for a tree that lasts a month at best, then dies and is thrown to the curb, is a priority that cannot be ignored.

These days my house is filled with trees; one in my bedroom decorated with all of the ornaments created by my kids through the years; one in the dining room, white with lime green, fuchsia and turquoise decorations, a nod to my lime green walls; two in my daughter’s room because there is no other person more obsessed with Christmas than she; one in my son’s room, and finally the rock star of them all, the big Fraser Fir in the living room crammed with white lights, Nielson ornaments tracking the years we’ve been a family, cat ornaments because next to the Christmas tree in importance is the cat (of course) and a variety of others we’ve collected over the years. Take all the other decorations away, and you can still eek out a bit of Christmas cheer. But take away the tree and none of the other decorations make sense. Plus, where would the presents go?

Whatever makes Christmas merry for you, enjoy it with your family, rejoice in it, and for heaven’s sake, get a decent tree!

View all posts by kathryn nielson